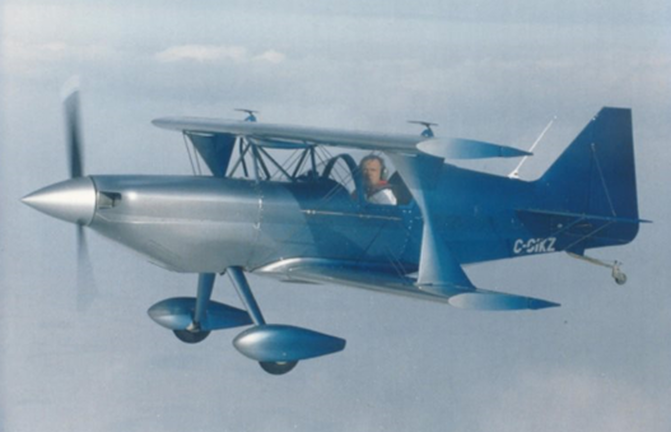 The world seems to be populated by nothing but hot rodders. Whether it is two wheels, four wheels, wings, hulls, sails or what have you, action sports are made up of folks who, no matter how good existing hardware may be, want it to be faster, higher climbing and flat scarifying in its performance. In the case of aerobatic airplanes, this means it must roll faster, ignore gravity, make square corners and generally trash the laws of physics while doing the aerodynamically impossible.
Gordon Price liked biplanes and it is no secret that he used the Pitts Special as a datum from which to launch his design. The Pitts had set the standard but Gordon Price thought he could design an even better biplane that would not only be ultra-modern, but could do battle with the monoplanes, which by that time, the mid-‘80s, dominated the upper levels of the sport.
The final design was the 20-300, which was actually the third step in a series of biplanes Gordon Price designed and kitted for the homebuilt market. The 10-100, was a hundred-horsepower entry-level model that, when fitted with twice the horsepower, became the 10-200. The 300 series, however, was designed specifically to be a monoplane killer: it was aimed at the unlimited competitive market and, as such, had to be up to the daunting task. And it was.
Price’s biplanes featured several unique features all of which were necessary, if the airplane was to play with the big dogs. The fully symmetrical wings were both swept, which helped it snap roll at blinding speeds. The ailerons were also symmetrical and were humungous, running from the center section to the tips on all four wings. This gave roll rates of 360°/second (most folks’ eyeballs glaze over at those rates). Then, in a move seldom seen in full-scale airplanes, the ailerons were coupled to the elevators and acted as flaps at extreme elevator deflection. So, when the pilot pulled hard, trying to make the nose pitch as quickly as possible, the ailerons dropped like flaps, which helped pitch the nose in the direction desired and let the wings continue lifting at higher angles of attack. Square corners became the trademark of the Ultimate 10-300.
To combat the anti-biplane bias that some feel exists at world competition levels, Gordon Price gave the airplane the side view of a monoplane. At 21 feet long for the 10-300 / 20-300, it’s one of the longest single-place biplanes [ 10-300 ] seen in aerobatics, while at the same time, the semi-supine seating position lets the fuselage remain super thin.
In essence what the 10-300 represents is the best of the biplane and monoplane worlds: the external wire bracing let Gordon Price design an incredibly strong airplane for its weight. The pencil-proportioned fuselage had the looks of a monoplane, thereby making it easier to judge and more likely to score well.
Still, it’s a dog-eat-airplane world out there and the Ultimate series of biplanes continues to be a rarity on the competition scene. It’s a highly respected acrobat but whether it actually is the ultimate has yet to be proven.